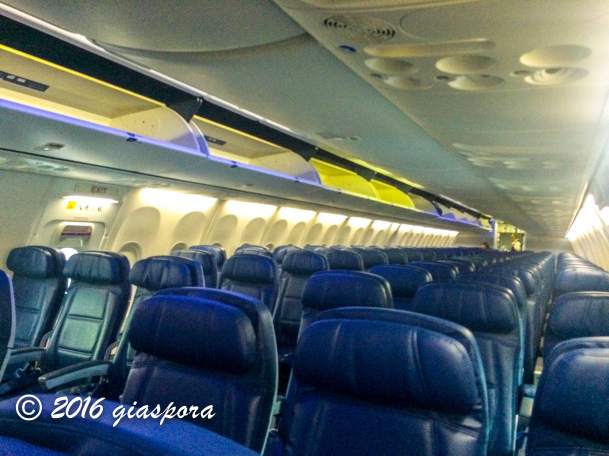 Hispanics, Blacks, Whites, Asians….   25 minutes of the familiar labyrinth of security procedures and muffled announcements, and my early Monday morning Delta flight will be bursting with people of different colors from all walks of life.

Traveling hundreds of thousands of miles annually, I learned to recognize the ocean of emotions prior to boarding – the bumptious executive petulantly jumping the line to claim his prized business seat, the student eager to go home for a break, the weary retiree couple dazed in the midst of airport mayhem, the distraught mother caught between comforting her wailing child and apologizing to the crabby stranger next to her….  each of these passengers have something in common – a destination in less than six hours – a distinct, defined purpose for the trip.

Reminds me of a journey that countless Filipinos oftentimes take in their lifetime.   An exodus that sometimes ends up on a oneway ticket to a far-flung destination… or at times, a roundtrip journey that ends at exactly where they started at.

Having lived outside the country for more than a decade and having developed lifelong friendships with our “kababayans” across Europe, Asia and the Americas, I realized that unlike my plane ride, such exodus – the Philippine diaspora¹ – has not always been with a purpose.   Rather, I fathom that it is as if we had developed a national cognizance and need to immigrate.

On one hand, we have our OFWs, our modern-day heroes, whose migration has a distinct and driving force.    I have met a significant number of them, and it pains and disheartens me that they sacrifice blood, sweat and tears to have a better life for their families by living in a foreign land.   Their exodus was driven by a clear need and a vision to address that need.  Their journey was planned, deliberate, purposeful.

On the other hand, the conundrums are the ones who are already successful back in our homeland and still choose to take on that exodus.   The impetus in making this journey remains to be an enigma.  For some, their journey has not been to necessarily “go towards” a planned destination similar to passengers on a plane, but to simply “run away from” something.   For others, it may be to liberate oneself from the shackles of being a third world citizen.  And for some, it may be to bring themselves even further up the ladder of social echelon…..  A surgeon struggling to find a US job even outside the comforts of his medical field, or the proud company president now pumping gas at the local gas station, or the successful corporate lawyer now on hourly wages struggling to make ends meet in her foreign adoptive country.

Though the drivers of the diaspora have evolved, its origins have economic roots.  As illustrated below, OFW departures mimic the prosperity of our neighbors, expressed in Country GDP per capita²:

Sadly, as the world becomes richer, our #1 export continues to grow.

OFWs leaving the country crossed the 1.0 million annual threshold in 2006, reaching almost 2 million today.  The phenomena’s most tangible economic benefit is the more than $25 billion in annual remittances that the Philippines receives, albeit, it continues to negatively affect family ties, culture and values.

Undoubtedly, Filipinos have been waiting for decades for some meaningful change since the dictatorship.  The hopes that we will indeed realize positive changes are getting dimmer as we learn more about the Duterte presidency.  Its floundering foreign affairs and incoherent national policies including its misguided focus on drugs (in lieu of economic growth) indicate that we are still decades away from reversing the brain drain a nation such as India is now accomplishing, in the process reawakening its economy, reviving its voice in the world and building world class businesses – all of which are foundations of a prosperous future.

From the superpower rise of China and Russia, the challenges of Brexit and the EU, the Mideast conflicts, South America’s economic transformation and the incoming Trump White House amongst others, these global events perhaps offer lessons for Filipino leaders in the country and across the world.

I invite you to join me in this plane ride, from the eyes of the Philippine Diaspora.

1.  Diaspora:  the movement or migration of a people away from an established or ancestral homeland